Arena Tycoon Greta (コゴミ Arena Tycoon Kogomi) is a Frontier Brain of the Hoenn region, at the Battle Arena. Upon defeat, Greta will give Trainers the Guts Symbol. 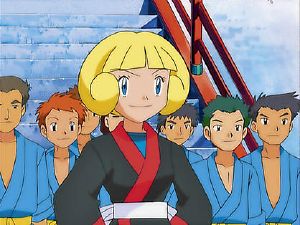 Greta along with her students in the anime.

Greta's first (and only) appearance in the Anime series was in the episode Wheel... of Frontier!. During this episode, Ash challenged Greta to a battle for the Guts Symbol. Before the two began though, a wheel was spun to see how many Pokémon could be kept for the battle. The Battle ended when Ash's Snorlax defeated Greta's Medicham, therefore Ash gained the Symbol.

When Greta was not battling Ash, she was seen running her own karate dojo. Sometime during the episode, Scott stated that before she was a Frontier Brain, Greta trained with two Gym Leaders: Brawly from Hoenn, and Chuck from Johto.

She battled against Emerald and lost. Though she commented on how happy Emerald was when fighting with his Pokémon. After the match Emerald was tired and she decided to help him.

Greta first appeared in Pokémon Emerald, as the Frontier Brain for the Battle Arena. She appears after 27 consecutive wins for the Silver Guts Symbol, and again after 55 wins for the Gold Guts Symbol. Upon meeting the player she questions their strength as a Trainer, but with her defeat Greta seems almost excited by the fact that someone beat her.