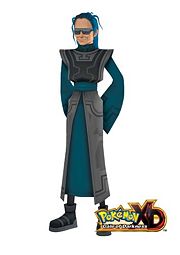 Ardos (Japanese: アルドス Ardos) is a Cipher Admin from Pokémon XD. Ardos is one of Grand Master Greevil's two bodyguards, and is revealed at the end of the game to also be one of Greevil's sons. He was the only character to be given this class until Heartgold and Soulsilver, when Eusine's class was changed from Mysticalman to this. Ardos saves the main character's sister from Zook at the beginning of the game, and later ends up battling the player to try to stop him from stopping Cipher's plot.