This article is about the TCG card. For the Pokémon species, go here. 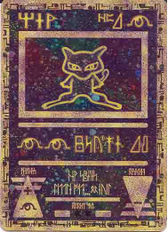 Ancient Mew is a Psychic-type Basic Pokémon card. It was released as a promotional card in the year 2000. This card's text is depicted in medieval Futhark Runic and Gothenburg Runic writing; this page uses their English equivalents.

Its' single attack is Psychic which does 40 damage and requires 2 Psychic Energy.

It is weak to Psychic x2. It's Retreat Cost is 2 energy.

The front and back of ancient Mew.

The front and back of Ancient Mew.