Amber Fuji (Ai in japanese) is the deceased daughter of Professor Fuji. She appeared in "The Uncut Story of Mewtwo's Origin" which was featured on Mewtwo Returns but originally was supposed to act as the beginning sequence to Mewtwo Strikes Back but was removed because of it's dark themes.

Mewtwo who befriended her was taught by her about life and how she was a clone like him along with three other Pokémon. Sadly Amber's clone along with the three other Pokémon had a sudden malfunction and vanished leaving the small Mewtwo alone and angry. In an attempt to stop his outrage, Professor Fuji ordered his team to erase all of Mewtwo's memories of Amber and the three clone Pokémon.

Later in the Movie Mewtwo strikes back, it was seen that Mewtwo had a Charizard, Blastoise and Venusaur which had similar patterns of the Charmander, Squirtle and Bulbasaur which had vanished along with Amber. This is to be belived as an act of resemblence and memories of what happened when Amber had been alive, showing that he does have some recollection to their relationship 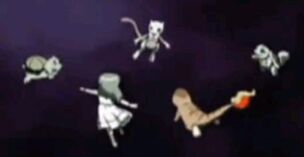