Agatha (キクコ Kikuko) is a member of the Elite Four and a primary antagonist during the Yellow Chapter of Pokémon Adventures.

Agatha is masterful in her control over Ghost Pokémon, being strong enough to battle against another strong Trainer, Professor Oak.

Agatha has a cruel personality, and believes that Pokémon and humans will never be able to live with one another. She bears a grudge against Professor Oak for leaving her research group, extending this deep hatred to his grandson, Blue. Agatha is only kind to those whom she believes shares her beliefs, as shown when she saved Lorelei's Seel from succumbing to the toxic waste produced by a factory. She also controls Bruno, which forces him to become a member of the Elite Four against his will.

Agatha's training of her Ghost-type Pokémon has ultimately manifested in them acquiring unique abilities. For example, Agatha's Arbok has an infinitely changing pattern on its crest, which enables Arbok to boost its speed, attack, and even make it invulnerable to Koga's poison. Agatha also makes use of special wristbands manufactured by her, which enables her to control masses of Pokémon, or even people.

Agatha is identical in appearance to her game counterpart. In her flashback, Agatha has slightly shorter hair and different clothing. 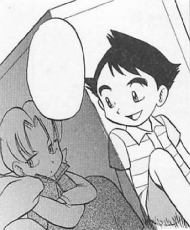 A young Pryce and Agatha.

During her youth, Agatha was close friends with Professor Oak, Kurt, The Day-Care Couple and Pryce. When Pryce's Lapras, La Glace lost its parents, Pryce became incredibly depressed and thus isolated himself from Agatha and his friends. Agatha expressed deep sympathy for him, and thus wrote a song with Oak and her friends to cheer him up.

File:Agatha's Past.png
Agatha facing off against Oak in the Pokémon Championships.

Agatha observed Professor Oak's battle at the Pokémon Championship, congratulating him on his victory afterwards. Oak walks over to her, as Agatha asks him why he quit the research team. He reveals that the research team was merely conducting experiments to make the Pokémon do their bidding, prompting Agatha to release her Gastly and Gengar. In response, Oak releases his Kangaskhan and Chansey, as the two begin to fight. Whilst Gengar and Kangaskhan grapple, Agatha asks what he will accomplish by himself, to which Oak reveals that his dream is to create a Pokémon Encyclopedia. Agatha refutes the idea, stating that he will not live to see the completion of such a project. Oak agrees, explaining to Agatha that it will be a job then for his descendants to complete. As Oak leaves her presence, Agatha calls out to him. Later, Agatha won the right to fight against Oak in the Pokémon Championship, and after an 8-hour long battle, he was declared the victor.

Later, Agatha appears before a young Lorelei at the base of a industrial factory. She uses her Gastly to heal Lorelei's sick Seel, and comments upon the depravity of humankind. Agatha then asks Lorelei whether the two would like to become partners.

Agatha and the rest of the Elite Four make brief appearances during the final battle between Red and Green at Indigo Plateau. Later, Agatha appears before Blue and Bozz at the Abandoned Power Plant, in an attempt to take revenge on Professor Oak by targeting his grandson. She attempts to use her Gengar to drain Blue's life force away with Dream Eater, but her plans are thwarted when Blue sees through Gengar's attacks. Agatha commends Blue's abilities, proclaiming that he truly is Professor Oak's grandson, before disappearing into thin air.

Agatha is first seen manipulating Super Nerd William before the Gym Leaders and Yellow, in an attempt to prevent him from speaking. However, her Gastly was defeated by Blue, and she retreated. When the Elite Four's plans begin to unfold on Cerise Island, Agatha sends her Haunter to attack Misty of Cerulean City. When the Pokédex Holders and the Team Rocket Executives form an alliance on Cerise Island to defeat them, Agatha faces off against Blue and Koga. As soon as they begin their battle, Koga and Blue find themselves hopelessly outmatched by Agatha's Arbok, which can change the pattern on its crest to alter its speed and attack. When Blue is targeted by Agatha, he is inflicted with Haunter's Lick, paralyzing him on the ground.

While Koga searches the surrounding area for Agatha, he throws a multitude of Shuriken Poké Balls randomly. Agatha mocks Koga's predicament, believing that he is out of ideas. However, Agatha realises that his aim was to heal Blue from his paralysing ailment, as Koga helps Blue up. Her Arbok's crest pattern is subsequently obscured by Koga's Golbat, whom he tells to drink his blood using Leech Life. Unable to see her Arbok's pattern, Agatha is easily defeated by the two, who proceed to move on further into Cerise Island. However, they are taken off guard by Agatha's second Arbok, which is defeated easily by Blue's quick thinking. As they continue through Cerise Island, they are ghosted by Agatha's Gengar, which assumes the form of their shadows. Agatha praises Blue's victories thus far, stating that he truly is Professor Oak's grandson. However, Agatha explains that, as long as they are in the underground catacombs, they are still on her terms.

Agatha waits in the shadows, watching her Gengar toy with the two Trainers. However, Blue and Koga manage to defeat it with help from his Arbok's severed tail, as the shadows around Agatha's battleground are diminished by Golbat's Confuse Ray. As Agatha reveals herself to Blue and Koga, she states that her only option is to escape. But before she does so, Agatha imparts a piece of information to Blue; that only one more Gym Badge is required to activate the amplification device that is Cerise Island. Agatha also explains the method behind controlling the mass swarm of Pokémon attacking the various Kanto cities and Bruno. She then disappears in a swirl of darkness around her Gastly.