From the Azurilland Wiki, a database for the Pokémon series that anyone can contribute to
Jump to: navigation, search
← Chimecho | Absol | Wynaut →

Absol (Japanese: アブソル Abusoru) is a Dark-type Pokémon introduced in Generation III. It can learn most TMs and is known as the 'disaster' Pokémon. 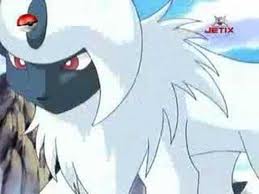 Absol in the anime

Absol has a dark blue face, tail, and scythe-like growth on the right side of its head. Some believe this to be an abnormal development of its right ear. Despite its appearance, this "scythe" is actually very soft to the touch, particularly whenever Absol is not tense or angry; when it does become so, the "scythe" lights up and becomes dangerously strong and sharp, though Absol will not use this to actually harm its instigator. Like owls, it seems to have one ear point upward and one point downward, supposedly to hear the exact location a sound is coming from. Absol is a very good-natured Pokémon that warns people of up-coming disasters by appearing before them. When it is not warning people in nearby cities, it spends its time up in the mountains. They have a snowy-white coat that is very soft to the touch.

Absol is widely believed to be based on the Bai Ze, a white beast taking the form of a lion that, in Chinese mythology, came down from the mountains and warned the city of an oncoming plague. In Japan this creature is known as the Kutabe. It is also distinguished as having a horn or horns, vicious claws, and sometimes having extra eyes on its head or back. However, it may also be based on the Egyptian Sphinx. Also worth noting is the design of the head: mostly white fur on the head with a small dark blue gem in the forehead, a dark blue face, and a scythe-like blade along its face. This design, and Absol itself, seems to be based on the symbol and principles of yin and yang.

Absol’s claim to fame (or infamy) is that it appears whenever a natural disaster is about to happen. Absol uses its sharp senses to detect subtle changes in the sky and the land, and with its knowledge of natural balance it can predict oncoming natural disasters (it may also be able to use its Future Sight technique in a similar way that Gardevoir or Espeon use to sense dangers to its trainer). It apparently carries a concern for the safety of humans because, once it detects the coming of a disaster, it goes off to the nearest human settlements to warn the people. In addition to Absol's personality, Absol's cry resembles a warning siren. Unfortunately, over time people have developed a misunderstood view of the Pokémon; they held a superstitious belief that Absol had a cause-and-effect relationship with disasters like earthquakes, gaining it a classic “bad luck” image. However, to the population of people who have come to understand the Pokémon, Absol is popular as a pet and as a Pokémon partner in areas prone to natural disasters because it can warn its owners of large-scale danger, making it a significantly valuable Pokémon for any trainer to have when facing the many dangers of the Pokémon world.

Absol plays a role in Red and Blue Rescue Team where it saves you and your partner from Articuno's wrath after you defeat it in battle. Then Absol joins you on your journey to meet Ninetales.

Absol does not evolve.

The name "Absol" could mean "absence" of "sol," or sunlight, which may refer to the fact that there is no sunlight (figuratively) or happiness (literally) in a natural disaster, explains why it is a Dark-type, and also why it is a nocturnal Pokémon. Another possible etymology comes from the word "absolve", i.e. Absol is absolved of any responsibility once the people have been warned. The name could also come from "absorb" or "absolution". Its name could also mean "absolute" because white is an absolute color, and in the game the dark blue areas appear black, also an absolute.